Tove Jansson queer literature – “A relationship like this is radical”

Did Tove Jansson write queer literature? That was one of the themes discussed at the Tove festival in Helsinki in September 2021. Below are some highlights from the discussion and also a video from the panel with English subtitles.

All three panellists – author Kaj Korkea-aho, journalist and presenter Mark Levengood and Associate Professor in Comparative Literature Mia Österlund – thought that there are queer themes to be found in Tove Jansson’s literature for those who are looking for it. But they agreed that queer interpretations of Jansson’s texts are only one way of reading them, and that the richness of possible readings is what makes her literature so exciting.

“In no way do I want to diminish or reduce Tove Jansson’s way of writing, it’s so very multifaceted and invites a wide range of interpretations”, said Mia Österlund.

“For example, the Groke in the Moomin stories has been interpreted as a personification of homophobia, but also lesbian desire and many other things. These are also themes and interpretations that change with time. Now we do certain queer readings which migh very well change over time ”, she said.

“Each person sees what he sees,
and that’s the whole idea”

Author Kaj Korkea-aho quoted a passage from Tove Jansson’s short story Art in Nature, which was originally published in Swedish in 1978. The story features a man, Mr Räsänen, who works as a guard at an art exhibition, where he ends up discussing with two guests after closing time. He tells them it’s the mystery that’s important, and goes on to make the following reflection:
“It’s funny about art. Each person sees what he sees, and that’s the whole idea.”

“The richness of Tove Jansson’s literature lies in that nothing is written clearly. It’s not clear that Sorry-oo [the dog in the Moomin stories who wants to play with cats] is queer. It just happens to like cats. And it is not written that Thingumy and Bob in the Moomin stories represent Tove and Vivica Bandler, or lesbian love. You find what you find. It’s not imposed on you”, said Korkea-aho.

“You absorb what you need and what you can. According to Tove and Räsänen, it’s meant to be that way. It is a very big and conciliatory approach to man and art.”

The butterfly coming out of the closet

Mark Levengood noted that the queer themes in Tove Jansson’s art emerge in the years after she met Vivica Bandler and fell in love with a woman for the first time.

“I’ve tried to analyse this and have come to the conclusion that people like us, we grow up, we enjoy our lives and the world, but we feel like something isn’t quite right. There is something about us that is different from everyone else. One day, if you are lucky, you meet a Vivica. You fall in love or have a great sexual experience. Suddenly everything falls into place. You’re like a caterpillar turning into a butterfly. It’s an explosive experience. Suddenly everything makes sense. You want to go out preaching – there’s nothing more annoying than young people who have recently come out of the closet. You’d rather meet a Jehovah’s Witness.”

“One day, if you are lucky,
you meet a Vivica”

“But it comes with such enormous force and I think it’s an underlying message, especially in the Moomin books, which are primarily aimed at a younger audience.”

“Then there’s another side of the coin. It’s the world you leave behind. You leave all those who actually love their little caterpillar. Those who expected things of the caterpillar. Whose expectations you feel you are betraying. That side, I feel I can find in Tove’s adult literature. In relation to her mother, for example. And when you have turned into a butterfly, you can never go back. The only thing worse than disappointing those who love you is disappointing yourself. It’s impossible to live like that. That’s what I think I see, but I might be reading myself into it. For me, this is the connection between the Moomin books and her adult literature.”

Some of the themes Mark Levengood described above could be read into Tove Jansson’s short story The Great Journey. The protagonist of the story is Rosa, a young woman whose girlfriend (a term actually never used in the story) wants to go on a long trip with her. Rosa tries to balance between the expectations of her partner Elena and her very demanding and clinging mother, who also wants to travel with Rosa. The true romantic nature of the relationship between Rosa and Elena is never stated out loud between Rosa and her mother, and the air is thick with suppressed emotions.

Elena yawned and pulled the ashtray closer.”And when are we going to travel for real?”
Rosa laughed a little but didn’t answer.
“No, look at me. When are we going to travel for real?”
“Sometime… There isn’t any rush.”
“You think? You’re over thirty and you’ve never travelled. I want your first trip to be with me. I want to show you cities and landscapes and teach you how to look at things in new ways and how to get along in places you don’t already know inside out. I want to put some life in you, do you understand?”

The Great Journey was written in 1978. Moderator Kira Schroeder noted that even though the nature of the relationship between the two young women is clear, it feels rather dark, at least in relation to Rosa’s mother. Mentions like ”One can’t talk about it”,  “Forbidden territory” are frequent.

“The fact that there is a relationship like this is radical”
“In this short story, you understand what it is all about. But it is mostly suggested. I think Rosa calls Elena her friend. There is no physical closeness. But you have to remember that this was in 1978”, said Kaj Korkea-aho.

“It was completely out in the open”

“Homosexuality was still classified as a disease and it had only been decriminalised a few years earlier. Just the fact that there is a relationship like this is radical. Tove was never an activist for queer rights, but she was always living openly with Tuulikki Pietilä, her life partner. They were even at the President’s Independence Day reception together. It was completely out in the open.”

“I’m thinking about exactly the same thing. It feels absurd that it was criminal until the 70s.  I was a criminal for six years as a result of simply existing!”, said Mark Levengood.

“The Great Journey was written in 1978. In 1976, Tove received the Pro-Finlandia Medal and she travelled in an open landau through Helsinki together with Tuulikki. And I remember how big of a statement it was. Because everyone knew that she was a lesbian. Nobody spoke ill of them either, from what I can remember. That’s simply how things were. This little trip they took was explosive.”

Fair Play – normalising the radical in an elderly queer relationship
The panel also discussed the relationship Tove Jansson depicts in Fair Play, published in 1989. The novel describes an elderly female couple living in separate artist’s studios, connected through the attic. Both are creating art – Jonna is a graphic artist and Mari is an author and illustrator.

“Tove is able to write and also live something very radical”

“There are no explicit sex scenes here either. It’s everyday life, an artist’s everyday life. It illustrates what we have been talking about, that Tove is able to write and also live something very radical that at the same time normalises it. That tension is quite groundbreaking in my opinion. And the novel received a prize from Seta – an LGBTI Rights organisation in Finland. People saw it as a queer statement”, said Mia Österlund.

The queer atmosphere in Who will Comfort Toffle

All panellists had been asked to read a paragraph from a story by Tove Jansson. Mia Österlund chose an example of something which changed the way she read Tove Jansson. Her choice was Who Will Comfort Toffle?, the picture book that was published in 1960.

“In Tove Jansson’s workbooks, it says that she for a long time worked with the name Knyttan instead of Knyttet in Swedish – which would have made Toffle a woman. If you read the picture book with this in mind, it becomes very exciting in my opinion”, said Österlund.

Toffle’s bag has a pink rose, Toffle wears high heels and a dress-like coat. It’s similar to the one Tove Jansson wears in the recent fiction film about Tove’s life, Österlund listed. Her conclusion is clear:

“There’s a queer atmosphere in the book.”

“And the end vignette, where Toffle and Miffle are sitting in a shell – it must be a picture of the female genitalia. I found an entirely new way of reading this picture book. That was really fun. When you’ve seen it once, you can’t unsee it. I can’t see it in any other way. Go and have a look at the pictures and you’ll understand what I mean.“

Watch the whole discussion at the Tove festival in Helsinki 2021 here: 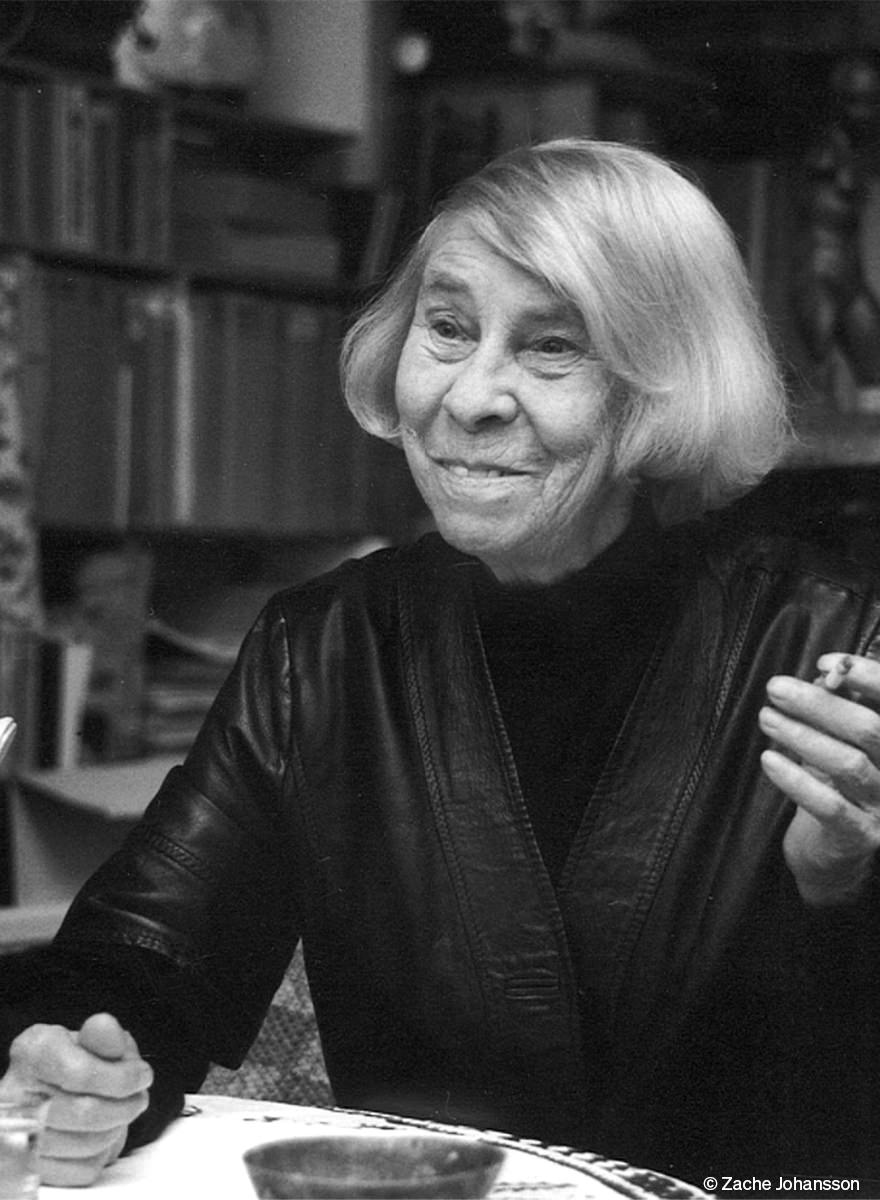